Last week, we explained the interaction of the Taxpayer’s Bill of Rights (TABOR) and the Gallagher Amendment, which are two parts of the Colorado Constitution that create a toxic mix for Colorado public schools and budget sustainability. This week, we bring you an explanation of a separate (but even more mystifying and absurd) problem created by TABOR: inequality in the property tax rates paid by property owners across Colorado.

Here’s what you should know: the property tax system that generates revenue for preK-12 education inexplicably places an outsized burden on certain taxpayers in our state. Some residential and commercial property owners in Colorado pay a property tax rate for education that is 10 to 14 times higher than property owners in neighboring school districts, and there is no good policy rationale for why this is the case.

Education is funded by local property taxes and other types of revenue from the state, such as income tax. During the past 30 years, thanks to the Gallagher Amendment, we’ve seen local property tax revenue decline, meaning the legislature must make up a growing and unsustainable share of preK-12 funding. Let’s look closer at the 36 percent of revenue that comes from property tax to understand a fundamental structural problem that plagues our school finance system.

The graph above presents an example of how our property tax system impacts residents in school districts on the Eastern Plains. In 2018, the median home value in Colorado is $312,400. If we imagine five identical taxpayers in five school districts, all living in a median value home, we can expect each of them to pay a vastly different amount into the system, from $97 in Pawnee to $611 in nearby Fort Morgan.

This map shows how mill levies are literally all over the map: 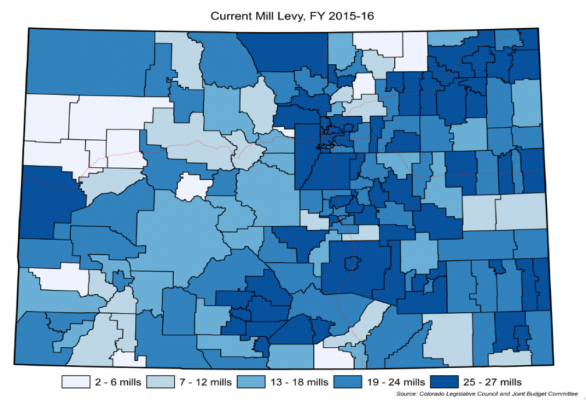 If a similar system applied to income tax, it would mean someone in Fort Morgan paying a 27 percent income tax rate, while an identical taxpayer in Kit Carson contributes 8 percent. This is, of course, not how income tax works; the state income tax for everyone is a flat 4.63 percent.

In each of the above instances, the state looks at the amount of local tax revenue raised and then backfills the difference to ensure every student has the same base per pupil investment.

Back up – what is a mill levy?

Mill levy is bureaucratic term for property tax rate. One mill is equal to 1/1000, so if a taxpayer’s K-12 rate is 27 mills, .027 is the number that goes into this equation. To calculate the amount of property tax someone pays on a home or business, one would do the following:

Add up all of the mill levies for all of the taxing entities in a neighborhood/school district/county, and that’s a full property tax bill.

Local school districts and voters have zero control over their total program mill levy—unlike mill levy overrides. When a school district wants to spend more revenue than what is allocated to it through the school funding formula, that district must seek approval from its voters to raise, or override, property tax revenues. These additional dollars stay in the district and do not affect the amount of state funding that the district is eligible to receive (more on mill levy overrides next week).

Seems crazy. Why did this happen?

In the mid-80s, the property tax system that funded education looked much like it does now, with mill levies varying widely. In 1988, the legislature enacted a “uniform” mill levy and phased it in, so that by 1991 most school districts had transitioned to 40 mills (or less if local property values were high enough to ensure schools were fully funded at a lower rate).

Enter the passage of the Taxpayer’s Bill of Rights in 1992. TABOR’s implementation limited local revenues so they could only grow annually by inflation plus population growth. In school districts where property value increased dramatically (due to an oil and gas boom, a tech boom, a growing resort community, etc.), local mill levies were statutorily required to fall so revenue remained within the cap. Importantly, once the mill levy “ratcheted” down, it remained down regardless of future changes in assessed value. The following chart shows total assessed property value in the Primero School District and the school district’s total program mill levy for FY 1993-94 through FY 2016-17. Primero’s assessed value per student increased largely as a result of oil and natural gas development but has since declined. The mill levy rate hasn’t changed with economic conditions, due to TABOR.

Over the course of 15 years (1992-2007), this dynamic created incredible variation in local mill levies. Legislators realized this was unsustainable and froze mill levies in place in 2007, and also froze the inequities that had already been introduced into the system in place.

Why should we care that our property tax system is wildly inequitable?

If we accept the basic assumption that an equitable revenue system would treat identical taxpayers (in this case measured by property value) identically, all of this matters for several reasons.

Inequitable treatment of taxpayers. With mill levies ranging from 1.68 to 27, the result is a wide variation in local investment in education. On houses with the exact same value, someone may be paying a property tax rate that is 14 times the rate in a neighboring district.

Regression. Current mill levies tend to be regressive, meaning “property poor” communities are taxed at disproportionately high rates. Because of the ratchet-down dynamic described above between 1992-2007, districts with high levels of assessed value per student tend to have the lowest mill levies, while districts with the lowest assessed values per student generally have the highest rates (example: Aspen levies 4.4 mills while Alamosa levies 27 mills). Many districts with relatively high assessed values and relatively low mill levies (like Aspen) continue to receive state funding, with some receiving more than 80 percent of their education funding from the state.

Subsidies. Because of the state backfill requirement for whatever revenue is not raised locally, taxpayers statewide are inherently subsidizing the inequitable mill levies through income and sales tax. For example, State General Fund dollars paid by taxpayers in the 39 school districts paying 27 mills subsidize low mill levies in other districts where property owners are paying a fraction of that rate.

Impact on school districts. If local investment in preK-12 education were more consistent, more state funds would be available to districts that are already paying higher mill levies but have a lower capacity to fund education locally because of low property wealth. For example, a consistent statewide mill levy of 27 mills (with some districts fully funded at less than that) would have raised almost $400 million in additional local revenues in 2017. A statewide levy of 33 mills would eliminate the budget stabilization factor (The IOU legislators wrote to schools during the recession) amount of $830 million.

Action is necessary to improve the equity of the education revenue system in Colorado for both taxpayers and school districts. The goal of the school finance formula is to equalize funding for school districts based on disparities in local funding capacity, but it instead subsidizes reduced levels of local investment. As we pointed out last week, we’ve lost control of our revenue system.

Unfortunately, total program mill levy inequity is just the first layer of inequity, on top of which we layer the inequities of local mill levy overrides that voters can control. We’ll get into that next week.