Colorado’s uninsured rate for children under 19 rose to nearly 6 percent in 2019, according to American Community Survey data released yesterday by the U.S. Census Bureau. Between 2018 and 2019, the number of Colorado children without health insurance increased by more than 10,000—the largest increase in the number of uninsured kids in at least a decade – and this was before the devastating public health and economic impacts of COVID-19. 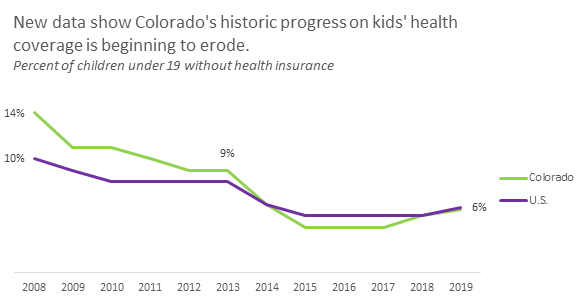 This increase follows several years of historic progress toward ensuring all Colorado kids have health coverage. Between 2008 and 2015 several state and federal policy changes, including the Affordable Care Act, helped drive down the percent of Colorado kids without health insurance from 14 percent to 4 percent, and more than 100,000 Colorado kids gained coverage. The newly released data show these remarkable gains are in jeopardy, and thousands more kids will struggle to access the health care they need. National data indicate that Latino children in the U.S. were most impacted by this loss of coverage – seeing the largest jump in their uninsured rate. This increase in uninsured rates among Latino children is likely due in part to the racist and hostile rhetoric of the Trump administration toward Latino people and immigrant families, in addition to the chilling effects of the public charge rule. There has also been a reduction in outreach and enrollment activities for publicly financed coverage at both the state and federal level. Particularly in light of the pandemic, state and federal policymakers must make kids’ health insurance a priority.

The new data also show that Colorado’s child poverty rate fell slightly to 11 percent in 2019—down from 12 percent in 2018 and its lowest level since 2000. Although poverty rates have declined for children of all races and ethnicities in recent years, racial and ethnic disparities in child poverty persist, with Colorado’s children of color more likely to be affected by poverty due to longstanding and present-day policies that have served as barriers to economic opportunity for people of color.

It is important to note that these newly released data capture a time period before the COVID-19 pandemic upended the lives of Colorado’s children and families and devastated the state’s economy. The pandemic and its economic fallout should add even more urgency to the work of ensuring every Colorado child lives in an economically secure family and has access to important health care.

Sarah Hughes is Vice President of Research Initiatives for the Colorado Children’s Campaign. In this role, she leads the organization’s research and data analysis efforts, including the development and publication of the annual KIDS COUNT in Colorado! report, and provides research and data support to inform and advance the Children’s Campaign’s policy agenda. She also co-chairs the organization’s internal Equity Team. Prior to joining the Children’s Campaign, Sarah worked in communications and spent several years working and volunteering with kids in various capacities.
Share This Post