Asian children and African-American children in Colorado saw the largest declines in child poverty rates between 2016 and 2017, and poverty rates declined for Hispanic children as well. Despite these declines, children of color in Colorado and across the U.S. continue to be more likely to experience poverty than their white peers due to historical and current-day policies and practices that have created barriers to economic opportunity for people of color.

*Indicates a statistically significant change in the child poverty rate between 2016 and 2017.

Because the federal poverty level only considers income and cash benefits, the decline in the state’s child poverty rate largely reflects an improving economy. Anti-poverty programs such as SNAP, WIC, the National School Lunch Program and housing vouchers, which together serve hundreds of thousands of Colorado children, are not included in the calculations of a family’s income. The federal poverty level therefore does not capture the impact of these programs on a family’s economic security. National estimates derived from using an alternate measure of poverty, however, showed that these programs lifted millions of people out of poverty in 2017.

The decline in Colorado’s child poverty rate is encouraging; however, we know that the rapidly rising cost of living in many Colorado communities has created circumstances in which families can be earning incomes well above the federal poverty level and still struggling to pay for necessities like housing, food and child care.

The new American Community Survey data also show that Colorado’s historic progress on connecting kids to health coverage has stalled. Colorado saw its uninsured rate for children fall by half between 2013 and 2016, largely thanks to provisions in the Affordable Care Act. Between 2016 and 2017, however, the uninsured rate for children under age 19 in Colorado remained flat at 4.3 percent, which aligns with what we saw across the nation as a whole. Latino children continue to be twice as likely to lack health coverage as their white peers because of language and interpretation barriers in systems and fear among Latino and immigrant families due to shifting federal policies. In total, about 57,000 Colorado children under 19 still lacked health coverage as of 2017; it’s essential that Colorado find strategies to remove barriers to health insurance for the 4 percent of children who still lack coverage. Children with health insurance coverage are less likely to drop out of high school, more likely to finish college and have higher incomes as adults, and every child in Colorado deserves the opportunity to meet their goals and thrive in their community. 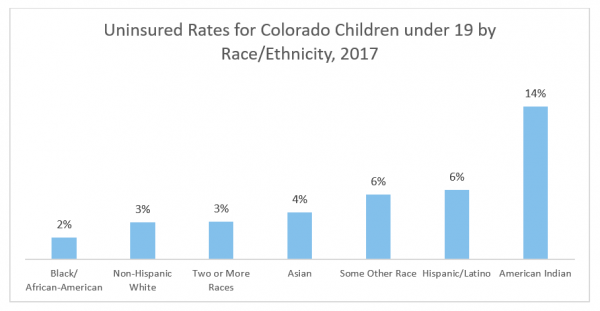 Stay tuned to next week’s KidsFlash for a deeper dive into the new American Community Survey data.

Sarah Hughes is Vice President of Research Initiatives for the Colorado Children’s Campaign. In this role, she leads the organization’s research and data analysis efforts, including the development and publication of the annual KIDS COUNT in Colorado! report, and provides research and data support to inform and advance the Children’s Campaign’s policy agenda. She also co-chairs the organization’s internal Equity Team. Prior to joining the Children’s Campaign, Sarah worked in communications and spent several years working and volunteering with kids in various capacities. She holds a Master of Social Work with a specialization in Advocacy, Leadership and Social Change from the University of Illinois and a B.S. in Business and Political Science from Washington University in St. Louis. She lives in Denver with her husband and their two crazy dogs.
Share This Post