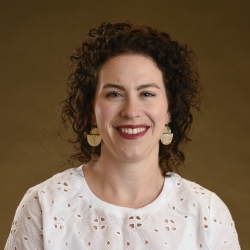 Katie Creedon manages the It’s About Kids (IAK) Network, which is the Children’s Campaign’s grassroots advocacy network. She is responsible for connecting with and providing resources to IAK leaders and communities statewide regarding policy issues affecting Colorado’s kids. Prior to joining the Children’s Campaign, Katie worked with nonprofits in both Colorado and Arkansas running programs for improved child welfare, disease and violence prevention, and access to health care.

A native of Nebraska, Katie found (like many) that she did not want to leave Denver after completing her MA at the Korbel School of International Studies at the University of Denver. She’s happy to be in Colorado over ten years later, working for Colorado’s children and families, and enjoying both the city and the mountains with her husband and daughter.

Hometown: Lincoln, Nebraska
College: John Brown University in Arkansas, B.S.; University of Denver, M.A.
Major: Undergraduate: Family & Human Services; Graduate: International Human Rights
Favorite Thing About Life In Colorado: The sunshine and the summers.
Favorite Denver Restaurant: Rioja
If You Were A Car, What Kind You Would Be: Sadly, probably a reliable Honda Accord.
Biggest Pet Peeve: People with no emotional intelligence whatsoever.
Worst Job You’ve Ever Had: Cleaning the women’s dorm bathrooms for undergrad work/study.
Best Job You've Ever Had: This one, of course.
Dream Job: Pastry Chef
Job You Wouldn't Do In A Million Years: Sales
Your Greatest Extravagance: Fancy foods – both for cooking and eating out.
Most Likely To Be Found On A Slow Friday Afternoon: Hanging out with my daughter and drinking too much coffee.
Favorite Colorado Getaway: Crested Butte
Favorite Sports Team: If I don’t say the Nebraska Cornhuskers, I’ll be disowned (P.S. Go Broncos!).
Proudest Accomplishment: Childbirth
Night Owl or Early Bird: Early Bird
Thing You Can’t Live Without: Hair products for my naturally curly hair
Favorite Book: "East of Eden" by John Steinbeck
Talent You Would Most Like To Have: Athletic abilities of ANY KIND.